Making Safety a Priority in the Metal Machining Industry 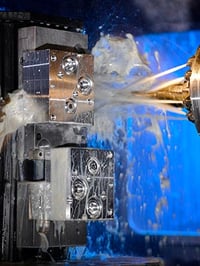 In industrial machining and grinding operations, metalworking fluids are used to reduce heat and friction and remove metal particles. Fluids can be water-based, including soluble oils and semisynthetic fluids, oil-based, such as petroleum oils, or a mixture containing anything from oils, emulsifiers and anti-weld agents to corrosion inhibitors and biocides, among others.

According to the Centers for Disease Control and Prevention (CDC) there are 1.2 million workers in the U.S. in metalworking and metal-forming operations who may be exposed to metalworking fluids. Exposure can happen by skin contact during parts and equipment handling or by breathing aerosols generated during grinding and machining operations.

The National Institute for Occupational Safety and Health (NIOSH), states occupational exposures to metalworking fluids may cause several health conditions, including:

What can employers do?

First, follow the standards and best practices set forth by the CDC, NIOSH and OSHA (Occupational Safety & Health Administration). By minimizing risks in the workplace, employers will reduce the likelihood of employees missing work due to occupational hazard exposure, as well as the amount of worker’s compensation claims – which can both negatively impact a company’s bottom line.

Additionally, there are a number of fundamental work practices that can minimize the impact of exposure to metalworking fluids. For example:

For United Foundries, Inc. of Canton, Ohio, removing the oil contaminant in the company’s metalworking fluids was crucial. While the company was following a number of the above-mentioned recommended practices; even with those processes in place, several grinder operators were getting dermatitis due to high bacteria levels in the coolant water solution used during the grinding process.

For grinding operators, the smallest cut or abrasion exposed them to the high levels of bacteria in the oil/water mix.

“We were adding more and more biocides to the coolant water, but the dermatitis problem was not going away,” said the company’s Safety and EPA Director, Mark Greene. “I knew I had to do something, fast. I needed something that would allow the operators to continue using the water process and keep bacteria growth at a minimum.”

Greene’s next move was to figure out a way to remove the oil in the water. He decided to purchase a Model 6V Brill® tube-type oil skimmer manufactured by Oil Skimmers, Inc. The skimmer, installed on a portable Cart Mount System, alternates between the foundry’s four grinders and runs two times per week for 60 to 90 minutes at each machine.

Easily modified to the shop’s specifications for usage below ground, the skimmer includes a 26-foot-long specially formulated polyurethane collector tube that skims the water’s surface and draws the oil in. Oil adheres to the outside of the tube and is drawn through scrapers where it is removed. The recovered oil collects in an oil-recycling drum. The clean tube is returned to the water to collect more oil.

Since the installation of the oil skimmer, the dermatitis problem is no longer an issue at United Foundries, Inc. According to Jack Dedmon, who had the most severe case of any of the operators: “The dermatitis cleared up almost immediately after we installed the oil skimmer.”

Additionally, Greene has found that the oil skimmer has paid for itself in lowered worker’s compensation costs.

For more information on how an oil skimmer can remove oil from your company’s metalworking fluids, contact: info@oilskim.com or call 800.200.4603

Download the white paper, "The Challenges of Removing Surface (Free-Floating) Oil by clicking the image below: